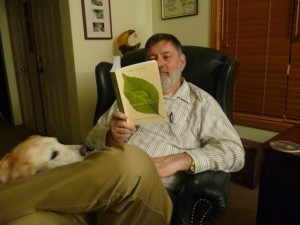 Awards of $200 are given to two Exploration & Discovery students whose work best demonstrates excellent research techniques. The awards were established in 2011 by the Aubrey R. Watzek Library in memory of Jim Kopp, who was the director of the Library from 1999 until his death in 2010.

As the director of the library, Jim provided leadership during a decade of unprecedented growth and change. Jim was a kind and humorous man with a passion for scholarly inquiry and a dedication to the library´s role in the liberal arts education. In fact, in his six years as an instructor in the Core program (2000-2007), he introduced many new college students to the liberal arts tradition, and mentored them as they embarked upon paths of intellectual inquiry.

These awards are sponsored by the library and supported by the Exploration & Discovery Program and the Dean of the College of Arts and Sciences. Donations to support these awards are much appreciated and may be made via the Library's Online Giving Form.

Applications will open on Friday, April 17, 2020 and close on Monday, May 11 at 11:59 p.m. Applicants are asked to complete the following on or before the application deadline:

Submissions are no longer being accepted. All applicants will be notified of the status of their applications by the end of June 2019 at the latest.